Missed us? Sorry. Someone forwarded us over a link to the My Brother, My Brother and Me podcast, and we’ve been incapacitated with a serious case of the funny bones. And, between the peals of laughter, we’ve been trying to come up with the perfect question to ask these modern-era advice dispensers.

So, it goes without saying that the workflow has gone from the raging river of a frat boy with 80 ounces of Natty Ice in his gut to the sad trickle of an aging insurance adjuster with an engorged prostate. For the sake of appeasing the suits, though, we did bust out these two new products. Check it:

Truck Pal Tailgate Ladder—There’s a lady who’s sure all that glitters is gold / And she’s buy-ai-ing a Westin tailgate ladder to heaven. If ever there was a truck bed accessory that inspired generations of teens to suck face behind the school bleachers, it’s this tailgate accessory from Westin. ZoSo!

P.S. We’ve been working on putting together a gaggle of install videos, showing you just how easy it is to bolt raw power onto your ride. Whiiiiiiiieeeeeeee, Whaaaaaaawwwwwwww, Waaaaaaaaaaaaa. That’s a little guitar solo that plays in our head every time we think of automotive horsepower. Squeeeeeeeeeeee, Squaaaaaaaaaaaaa, Doooooooooowaaaaaaaaa. So, check out this trick AutoAnything Airaid Throttle Body Spacer install video, and see what kind of soundtrack your mind comes up with.

Wiccans don’t need to be reminded that today’s the summer solstice. Not only are their crystal-clad bodies naturally in tune with Gaia’s shifting phases, but their Twilight calendars also have Crayloa-scrawled pentagrams on today’s box as a reminder. If you’re not a follower of the horned god and moon-drenched goddess and if you don’t have a pentagram-marked Twilight calendar, you at least have us. You’re welcome.

Besides spreading solstice cheer, we’re here with good news: two of the bossest brands in the business, Edge and Injen, are running summer specials.

Edge’s sale is twofold. First, we’re reducing our prices on the Juice Attitude, Evolution CS and Evolution CTS. Second, Edge is matching our cut in sales and giving you back cold, hard cash (up to $50) through a rebate when you order one of those programmers between now and August 2, 2010.

Injen’s special doesn’t require any math. Simply put: order any Injen air intake system, get a free Hydro Shield while supplies last. So hurry up because supplies will last about as long as a Big Stick at the Puerto Rican Day Parade.

13 New Accessories Flying At You Like A Zidane Headbutt

With the kick off of the World Cup underway, you may have been a tad busy honing your hooliganing abilities to notice that our digital shelves expanded with 13 new accessories from Thule, Kurgo, Edge, INNO and Party King Tailgate Grills. We don’t blame you—it’d be embarrassing to show up at the local sports bar with rusty sucker punching, smoke-bomb lighting and urine-filled-balloon tossing skills. If you do have some downtime between matches, check out these great new offerings.

Party King Swing N Smoke Tailgate Grill—When your adult league softball game ends, the last thing you want to do is brave the long lines and overpriced Coors at Shakey’s. Besides, do you know what kind of grody shenanigans go on in the kitchens of family restaurants? Be your own chef with this smoking new hitch-mounted tailgate grill from Party King Grills.

Thule Canoe Carrier—If loading and lugging your canoe around town leaves you squealing like a pig, it’s time to upgrade from your Rube Goldberg roof rack contraption and get a proper Thule racks canoe carrier.

Thule Goal Post—More than just a canoe carrier, this hitch-mounted vessel support doubles as the ultimate upright for your next paper football tournament.

Thule Load Straps—Nervous that the gear on your roof is going to fly off and become road kill? Lash it down with these heavy-duty roof rack accessories.

Thule Hydro Glide Kayak Rack—Thanks to the friction-free felt lining on these kayak racks, pushing a kayak onto your roof feels as smooth as bowling a baby down a Slip ‘n Slide slathered with Astroglide. 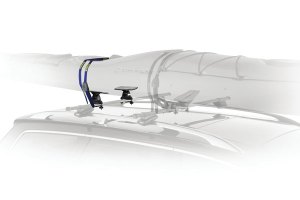 INNO Wind Fairing—Sick of getting slapped by your neighborhood chickas because they confuse the whistle of your roof rack with a cat call? This new INNO fairing should boost your game. 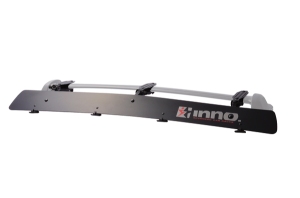 Kurgo Tire Totes—Move over Gucci, Coach and Jimmy Choo—make way for the newest Kurgo tote to hit the runway. Tire storage has never been so couture. 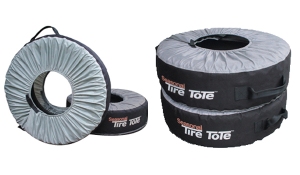 Kurgo Tire Garage—It’s the American dream: a chicken in every pot and a tire in every tire garage. 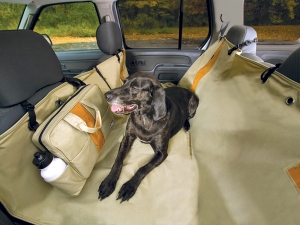 Kurgo Wander Dog Carrier—There are 4 rules for mogwai care; don’t get them wet, don’t expose them to bright light, don’t feed them after midnight, and always transport them in one of these dog carriers.

Edge Insight CS/CTS—Fortune cookies are excellent sources for lotto numbers, but they can’t measure your ride’s 0-60 time like one of these new performance monitors from Edge chips.

Worried that someone you care about might give you a gift this holiday that’ll make you question why you care about them? There’s only 1 sure fire way to make sure your loved ones don’t accidentally reveal that they know nothing about you: tell ‘em what you want. Here are a couple of suggestions that we added to our site last night.

Like a Cirque du Soleil performer (minus the androgynous bulges) for your pick-up.

Through the eyes of your Chewbacca mask, this makes your dash look just like the one in the Millennium Falcon. 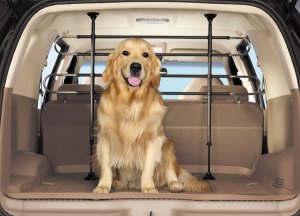 Even though dog is man's best friend, he doesn't get permanent "shotgun" privileges.

It’s Friday the 13th; the weekend is so close you can almost taste it.  Feeling sluggish? Is time going by at a snails pace? Well we’ve had a lot going on this week and have just the jump-start you need to energize your day; you can check out our new Car Battery department, complete with Performance Batteries and Battery Mount categories, full of Braille Battery products. And if that’s not enough, check out the new Truck Bed Bars category or the new brand CarBox. You’re sure to find something to get your day started off right, get all the details below.

That’s all for this Friday, check back next week to get the low-down on our latest product additions!

January has come and gone, the Steelers just barely beat out the Card’s in the Superbowl and Punxsutawney Phil gets to take another 6 weeks of PTO. As exciting as all that has been, we’ve got some breaking news of our own that hasn’t hit the papers yet.

We’ve added two new products, a cold air intake and a beefy throttle body spacer, both from Street & Performance Electronics. We also setup some fantastic promos with our vendors. They’re so good, in fact, that even our little groundhog friend will be sorry he hibernated through the deals.  :)

If you thought new products were the only thing we’ve been working on, then you should be stoked to know that we’ve lined up some $25 rebates on a few AFE products and some special promos with Truxedo, BAK, Extang, Undercover, Borla and MBRP. Here’s the deal:

AFE – Get a $25 cash card (via AFE mail-in-rebate) on AFE’s Stage 2 intake, the Blade Runner intake manifold, the Mach Force XP & Large Bore HD exhaust systems. The purchase must be made between 2/1/09 and 4/30/09, click the banner for complete details.

We’ve also worked out a few truck tonneau cover and exhaust promos.  All of these promotions are valid through 2/28/09. Here’s the quick and dirty break down, click the links if you want to get all the details.

That’s what I’ve got for you this week, but keep an eye on the blog to stay in the loop, we’ll have even more for you next week.

We’ve taken an additional 10% off the Edge Evolution, Edge Mileage and Edge Juice programmers. Not only that, but we’ll overnight ship your order for FREE and throw in a Edge sweatshirt at no additional cost.  This promotion just started today and ends 3/5/09, so if you’ve been wanting an Edge power programmer, don’t miss out on this deal because it’s the best you’ll find, on or off the net.

Putting some extra ponies into your daily motoring used to take entire days, cost hundreds of dollars in parts, and usually cause the loss of three or four knuckles. Not so in today’s computer-controlled vehicles, where tuning is about as easy as playing Tetris on a Game Boy. Let’s take a look at performance chips and programmers and how they’ve changed vehicle tuning.

Chances are you’ve seen the Saturday afternoon show geared toward squeezing every droplet of power out of a 50s or 60s classic. You know—the one hosted by two middle-aged guys, one with a toupee that may as well have “this is a toupee” painted on it. They spend the entire half-hour show with a bunch of time-lapsed shots taken of them tearing the engine apart to put in highly-specialized, insanely expensive parts. Once the project’s done, they fire-up the dyno and laud the 3hp gain they received for about 4 hours of total work. If you’re like me, that’s not exactly how you want to spend a weekend, all for 3hp that you may not even notice with your rear-o-meter.

Fortunately, you’re probably also driving a computer-controlled vehicle, like most of the ones sold for the last 25 years or so. That makes tuning much easier, because a set of programming determines the way your engine performs. Replace the programming with a set geared toward performance, and you have near-instant power gains. Don’t get me wrong—there’s a lot to be said for the virtues of a computer-free classic that you have full control over. But, when it comes to getting more power in just a few minutes time without ripping your hands to shreds or spending thousands on obscure parts, a computer-controlled vehicle has a distinct advantage.

How can you make these changes in minutes? With a power programmer or performance chip, like the ones made by Hypertech or Diablosport. These programmers are built to hold performance settings tested by experienced pros for your specific engine. All you have to do is plug it into the OBD-II port beneath your steering column. With simple yes or no commands, you can adjust how you want your engine to perform, upload the new programming, and you’re ready to rock with 25hp or more extra. The maximum time this will take to complete: just 10 minutes.

More Products that could feast the need for speed and ones that I found most promising in power gains are:

Many drivers who want the extra power are leery of this tuning method. “How can so much power be had so fast, when the TV pros spend hours to get few gains?” they ask. The answer is that automakers down-tune their cars for the masses. Engines are setup to work the same for you, the budding performance enthusiast, as they are for the elderly, who like to travel half the speed limit or through the occasional farmer’s market. You aren’t the average driver, and performance programmers aren’t average settings. It’s a perfect match for you; it’s not a perfect match for your mother.

Some drivers worry about warranty when they’re considering a performance programmer. Not only to the companies that make programmers take safety into account with their settings, they often give you ways to return to stock settings for service visits at the dealership. And, as with all performance mods, you’re protected by the Magnuson-Moss Warranty Act, a federal law that basically states that your vehicle’s warranty can’t be voided by mods unless the mods can be proven as the source of trouble. In other words, there’s no reason to wait—the true potential is waiting to be unlocked, and you can do it without breaking a sweat.

Maximize your ride with performance chips, available from time-tested brands like a Hypertech programmer and Diablosport.